Today’s recipe is a little bit special because it is a traditional dessert served during the epiphany. This cake is not only delicious but also really fun as there is something to win!

Where to start? Galette des rois is a traditional dessert served during the epiphany to celebrate the three kings who went to see the infant Jesus. This cake is more sort of a pie actually as it is made out of two round flaky crusts with an almond cream filling called “frangipane”. The South of France has a different variation of it which is quite different as it is a brioche (or sweet bread, you can see my recipe in my previous post here) covered of sugar and candied fruits. For more information about the history of the galette, you can check this website, it is very informative. The galette recipe I will be sharing with you is also known as the Parisian galette and is the most popular in France. The addition to this delicious cake is a “fève” or little character made of porcelaine placed inside the cake (see picture below). The person who get the “fève” inside his piece of cake becomes the king or queen and has to wear a paper crown. This is why it is such a fun cake to share, and especially for kids. As a kid, I cared much more for the “fève” itself than for the cake and acquired quite a collection of them. 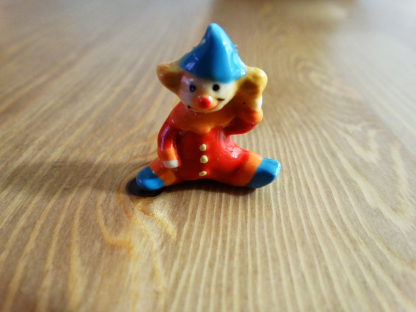 In France, it became a very popular event, and even though it is to celebrate the epiphany, you can buy galette right after Christmas and until the end of January. This event became very commercial in France like Valentine’s Day for example. You can find galettes everywhere from grocery stores to bakeries.

I have been quite surprised to find galette des rois in Toronto and in case you are looking for them too I advise you to check your nearest French bakery or St Lawrence market. For those who prefer making it at home here is the recipe!

I have been looking online where to buy “fèves” and found a couple for you if you are interested! It is a bit pricey but you get several “fèves”. You can always re-use them every year if you want. I found some at amazon.ca mostly ( here and here), but you can look on the amazon page of your country for them too.

For the pastry cream:

For the almond cream:

1- The most important part of the galette being the filling, the first part of the recipe will be to make the pastry cream. In a large bowl, whisk the eggs and the sugar until the mixture whiten (it should turn into a light yellow). Add the flour and mix again. In a pot, warm up the milk with the vanilla bean paste (don’t let the milk boil). Pour the warm milk over the mixture in the bowl and mix well. Pour back the mixture into the pot, and let it thicken on low eat. Keep mixing until the cream is thick. Pour it in a bowl, cover with cling wrap and let it cool down for about an hour.

2- For the almond cream, whip the butter and the sugar together (Make sure that your butter is soft enough before starting). Whip until the mixture whiten. Add the eggs one by one, and add the ground almonds. Mix well.

3- Mix the pastry cream and the almond cream together. Add a tablespoon or rum and mix again.

4- Take your 2 flaky crust and cut a large circle in both of them ( I haven’t been able to find a round flaky crust at any store, but if you find one it is better). On one the circle pour the almond filling letting about an inch on the sides. Place the feve in the filling. Mix 2 yolks in a bowl and brush the extremities. Put the other circle of crust on top and seal the sides by pressing down a little.

5- With a fork, press down all round the sides like on the picture below:

6- Then draw lines on the top of the crust with a knife (be careful to not press down too much). You can do as on the picture below, or do the drawing of your choice. Then brush the crust with an egg yolk. 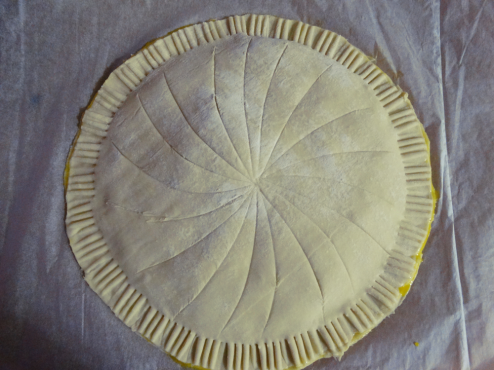 I hope you will enjoy this recipe and like always let me know in the comments if you liked it or tried it before!