Today’s recipe is part of a monthly food challenge on Foodies +, a community that I am part of on Google +. The goal was to make a pie using selected seasonal ingredients such as pumpkin, butternut, apples, pears, pecans, chestnuts, etc. When I saw the challenge I immediately thought of making a sweet pie using a very special French ingredient: crème de marrons. Crème de marrons (translated Chestnuts Cream) is basically a chestnut jam which was invented by Clément Faugier in Ardèche, Rhône-Alpes. This jam is used in many recipes in France and one that became very famous is Mont-blanc, a dessert made with crème de marrons.

The funny part is that I actually never tried it before making this pie so it was really interesting to discover the taste for the first time. I decided to make my own chestnuts cream at home but it can easily be found online as well (especially on amazon) . I strongly recommend the brand Clément Faugier as it is the traditional chestnuts cream. I wasn’t to happy about the recipe I used so that’s why I am not sharing it. The process is quite simple though, you have to boil the chestnuts twice. The first time for about 15-20 min and this will help you remove the first skin or shell. Then you have to boil it again for about 50 min and this will help you remove the second skin/shell. And that’s where the difficulty was! I had a very hard time removing both shells. Once out of the shell, you have to ground the chestnuts in a food processor until it becomes a sort of paste and cook the paste in a sugar syrup with vanilla. The taste was quite surprising at first, probably because I consider chestnuts to be savory and not sweet. To be honest with you,  I didn’t like it too much and was wondering how the pie would turn out. Once mixed into the pastry cream and whipping cream, I found that the original taste was mostly gone and I really enjoyed the taste so I think that if you don’t like it too much or if the name chestnut jam scares you, I reassure you that it will taste good! Then I added an almond shortbread crust, caramelized apples and maple pecans that just made this pie even more delicious and perfect for the gourmet inside me. I find the combination of textures really interesting because you get a smooth cream and soft apples with a crunchy crust and pecans. It has a rich caramel and nutty flavor to it which make this pie a pure heaven for your palate. It has quite a bit of steps but I can assure you that everything is easy to prepare and the result is so worth it!

1- Pour the milk and the vanilla bean paste in a pot and let it boil.

2- In the mean time, add the yolks, sugar and corn starch in a mixing bowl. Mix well until you get a homogeneous mixture. Pour the warm milk over little by little and mixing at the same time. Make sure it is homogeneous and pour back in the pot. Heat on medium heat until it thickens. Once it stays on the spoon it means that it is thick enough. Pour into a mixing bowl and let it cool down.

3- Once the cream has cooled down, add the chestnut cream and mix well.

4- In a separate bowl, whip the heavy cream until firm. Make sure that your cream is very cold so it will be easier and faster to whip. Incorporate the whipped cream little by little to the previous mixture. Fold gently until everything is smooth and homogeneous. Cover with surround wrap and reserve in the fridge.

1- Before starting your pie crust, make sure to let your butter at room temperature so it becomes soft. In a large mixing bowl, mix the butter until it gets a creamy consistency (also called beurre en pommade in French). Add the icing sugar and ground almonds and mix well. Then add the flour and mix until you get a smooth and non sticky mixture. Form a ball, cover with surround wrap and reserve in the fridge for 1h. Preheat the oven at 365 F.

2- After 1 hour, take the pie crust out of the fridge and flatten it with a rolling pin. Place it into a buttered and sugar coated pie plate and smooth the edges. Prick with a fork. Place a piece of parchemin paper on top and fill the inside with beans. This will ensure that the crust keep its shape while baking.

3- Bake until the edges are colored (about 25 min for me) and let it cool down.

1- Peel and cut the apples in quarters. Cut each quarter into 3 slices.

2- In a frying pan heat up the butter. Once it is melted add the apples and cover with the sugar.

1- In a frying pan, add the pecans and the maple syrup. Cook on medium heat and stir regularly. Just like sugar, the maple syrup with start caramelizing and becoming sticky like regular caramel. Once it becomes like caramel, turn of the heat and pour the caramelized pecan on a piece of parchemin paper. Let them cool down.

1- The final step is to put everything together. Inside the pie crust, add the caramelized apples. Spread them out so all of the inside is covered.

2- Add the chestnut cream in a piping bag and pipe it on top of the caramelized apples.

3- Chop the caramelized maple pecans into pieces and sprinkle them on top of the pie. Reserve in the fridge until it is time to be eaten and enjoy!

There are many steps for this pie but they are easy and don’t take too much time. The trick is to prepare the other steps while waiting. I started by the chestnut cream then while it was cooling down I prepared the crust. While waiting for the crust, I prepared the caramelized apples and pecans. It’s a really delicious pie that will be perfect for the season! 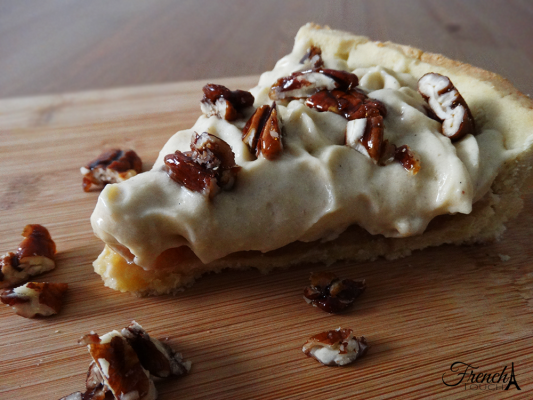 I hope you will enjoy this recipe! Let me know in the comment section what you think about this recipe and if you liked it.