I am coming back with a new French recipe called Flammekueche or Tarte flambée! As you may have noticed the name does not sound very French, and this for a good reason: it is from Alsace! For those who do not know very well France and its regions, Alsace is a region in the North-East of France, next to Germany.

It would be waaay to long to explain all the history of this beautiful region, but here is a tiny version. Because of its proximity with Germany, Alsace became German and then French again many times before finally being fully part of France. This is why Alsace’s culture is very close to German’s culture and that their dialect is very similar to German. Flammekueche means “Flame cake” in Alsacian (thanks Wikipedia!).

Because the name is a bit complicated to pronounce, I introduced it as a French Pizza to my boyfriend and my friends and they all really loved it. To quote my boyfriend: “I could eat hundreds of them”! What I really like about tarte flambée is that it is quite cheap and easy to make. This is basically a very thin crust, cream, onions and bacon. It is traditionally made with fromage blanc, or literally “white cheese” which is close to fresh cheese. But fresh cheese being quite expensive here, I had to make an equivalent by mixing the sour cream with cream cheese. I find the taste very close and I hope you will too if you tried traditional tarte flambée before.

Here are all the ingredients you need for the dough. This recipe makes 4 flammekueche.

I found this recipe on jds.fr. If you know some French, I invite you to visit their page, they have plenty of good recipes there!

First, add the flour and the salt in a bowl. Then, add the oil and start mixing.  Add the warm water and mix well until you can shape a ball.

Tips: It is important to mix well. If after mixing you think the dough needs more water, then you can add a little, mix, and add some again if necessary.

When I prepare flammekueche, I usually prefer preparing all the ingredients before making the dough, so the dough doesn’t dry during the preparation.

You can add more toppings if you wish. In France, we usually add grated gruyere, mushrooms or Munster ( it is a very soft and stinky cheese, very different from its american brother). 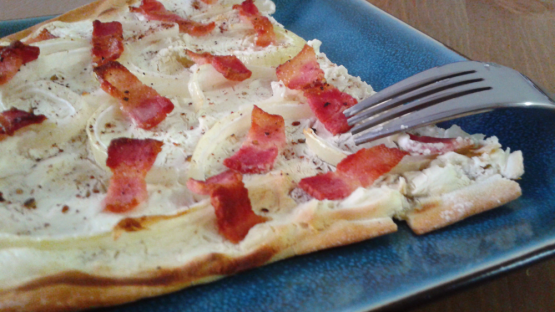 I hope you enjoy this recipe! Let me know if you tried it and if you like it in the comments.