Maybe you have noticed, where you live or when you travel, that exotic foods such as Chinese or Indian foods are often different than the real thing and they also accommodate the taste and culture of the country by customizing dishes. In France, Chinese buffet often serve frog legs cooked in a Chinese way (I don’t think anyone eats this though!) and of course what would be a meal without our good old cheese. I have been in several Japanese restaurants in France and one of the appetizers to get is the beef and cheese skewers. They are delicious and definitely everything but Japanese. And of course Indian restaurants have cheese too in the form of a cheese naan!

I won’t lie to you I love cheese naans! And what a surprise to realize that it isn’t a staple everywhere else in the world. I have been looking all over Toronto for my precious cheese naans but no restaurants offer them. So maybe they exist where you live and you understand my struggle, and this is why I have decided to make them myself!

I know that when people hear cheese they think gooey or stringy but we are not talking about the same kind of cheese in this case. Cheese naans in France have a nice creamy layer of cheese and I always found it close to the taste and texture of the laughing cow. I researched for recipes and found many but not one was really like I wanted, and also the technique, even explained just wasn’t working for me. So I came up with this recipe, most crispy than the original and with a very easy technique!

1- In a large mixing bowl, add the flour, sugar, salt and yeast. Mix well so you have a homogeneous mixture.

2- Add the oil and the yogurt and mix well. Then add the warm water so it will activate the yeast. Knead the dough until it is smooth and non-sticky. If the dough is sticky keep adding flour little by little until it is not sticky anymore. Roll the dough into a ball, brush with some oil and let it sit in a warm place for 3 to 4 hours. In the mean time, add all your laughing cow portions into a bowl and mash them. Let the bowl on the table and not in the fridge. If the laughing cows are cold, it will be hard to spread on your naans.

3- After 3 to 4 hours the dough should have doubled in volume. Dust your table with flour and knead your dough for a couple minutes. Roll it into a ball again and cut it in 4 pieces. Preheat your oven at 500 F. See the picture below: 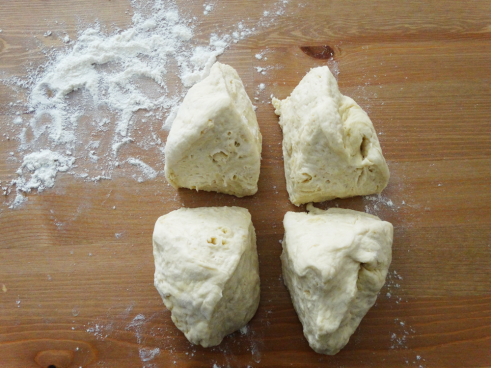 4- Cut each pieces in half. This will give you 4 large naans. If you wish to make them smaller, cut each piece in half again. See picture below: 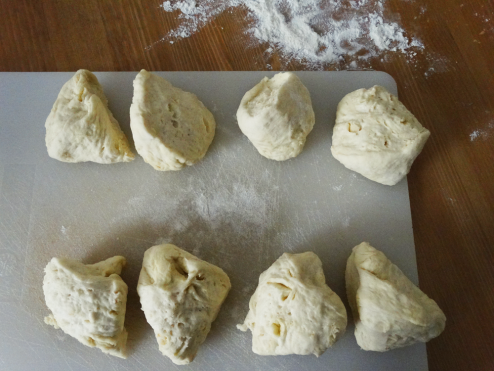 5- Roll each piece until you get a thin circle. See picture below: 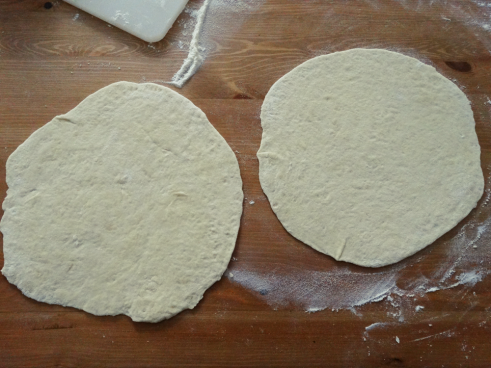 6- Spread some of your mashed laughing cows on 1 circle. Let about 1/2 to 1 inch diameter around the edges. See picture below:

7- Put some water all around the edges of your naan. Add another circle on top of the circle with cheese and press the edges. Repeat for each naan.

8- Put your naans in the oven at 500 F for about 5 to 6 min. Then flip them and bake for 1 to 2 more minutes. Each side should be golden brown. You can add some butter or ghee on top of your naans before putting them in the oven, or after baking them, when they are still warm. I personally prefer putting it before baking them so it doesn’t feel as greasy and give them a nice color.

I love eating cheese naans just by themselves but it would go well with a delicious Indian curry. 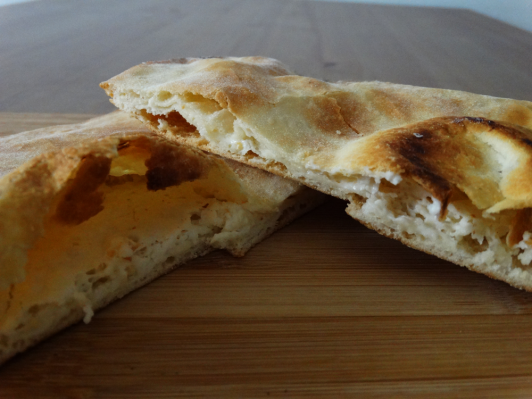 Let me know in the comments if cheese naans also exist where you live. And also I would love to know if it actually exist in India (or a similar version).